I remain ever impressed by this gal’s work, especially this time around. S.D. continues to produce excellently creative projects which explore the dark side of psychology, decay, madness, and fear. I just…love her! She has just published a photo series called Beautiful Corpses. Make sure to click on the images below to enlarge and take in all the details. I love the color choices and the contrasts. Follow her Instagram @scurvydrunkard 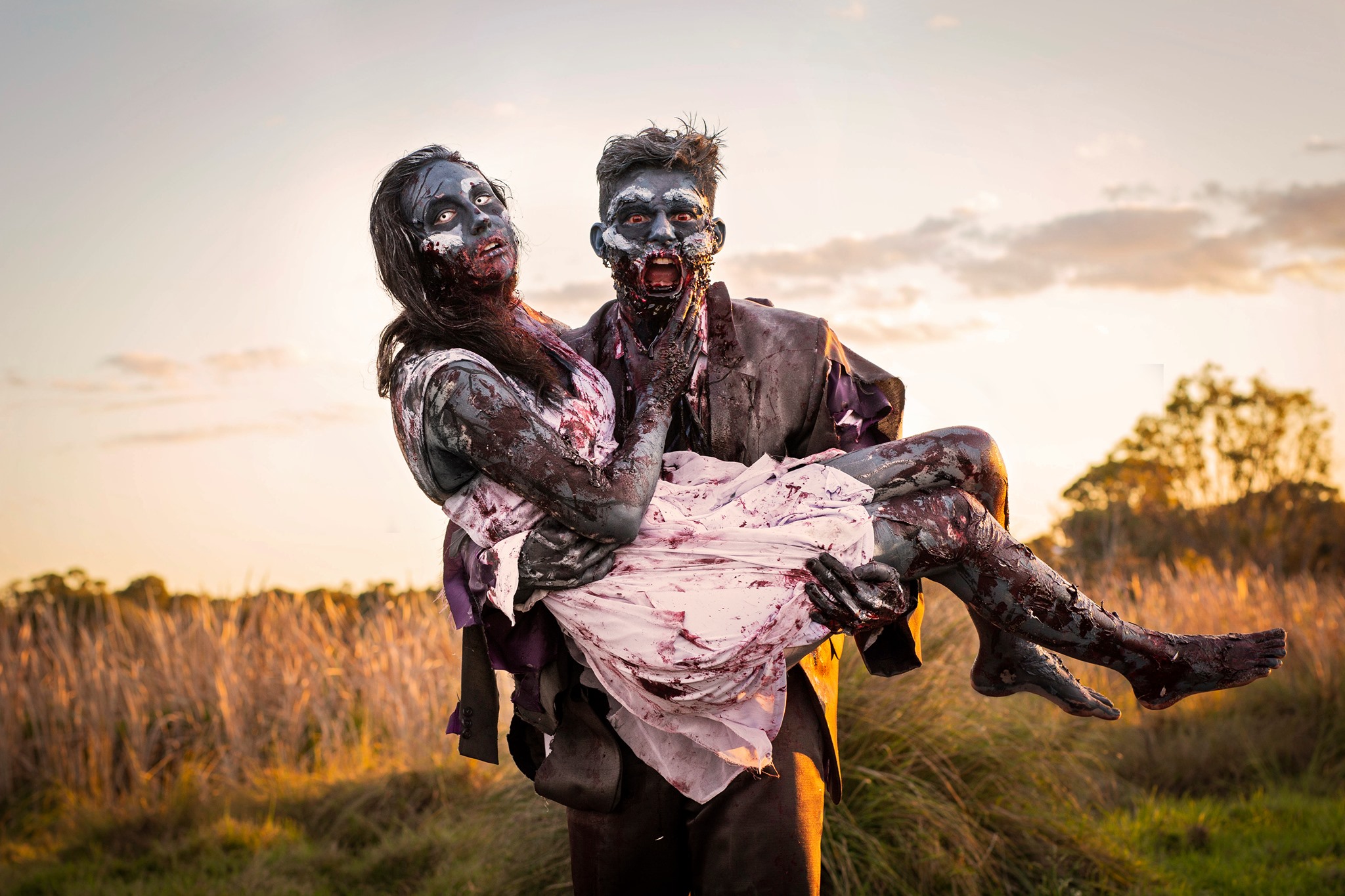 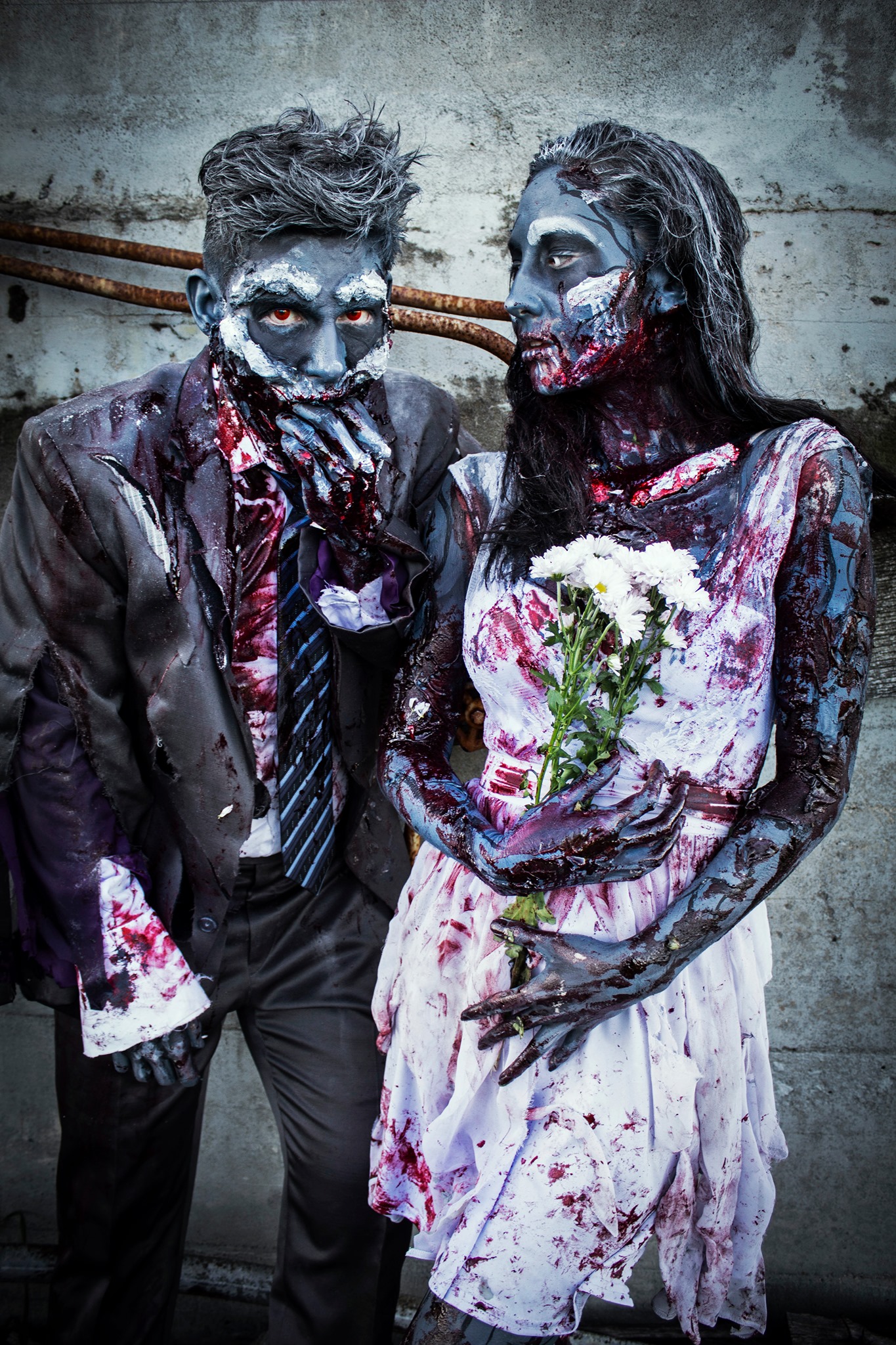 The obsession
with possession-
the utmost pointless pursuit.
The compulsive urge to preserve
these THINGS which can be seen
felt, or heard.
A washboard must be attained
Guzzling eggs, a dozen a day.
Perhaps a home to die in,
if you can find a way to pay.
Everything, in excess.
Perhaps some-body to display.
The borrowed land you call your own
will also waste away.
You have cried from the hunger
since the day you were born.
Reduced yourself to but a number
insatiably seeking to adorn
the skin you’re living in
always seeking outward things
when one could truly make their mark
if only one would look within.
If only one would look within.
All material traces, forgot
Blood oaths will clot
And the flesh will rot
The flesh will rot. 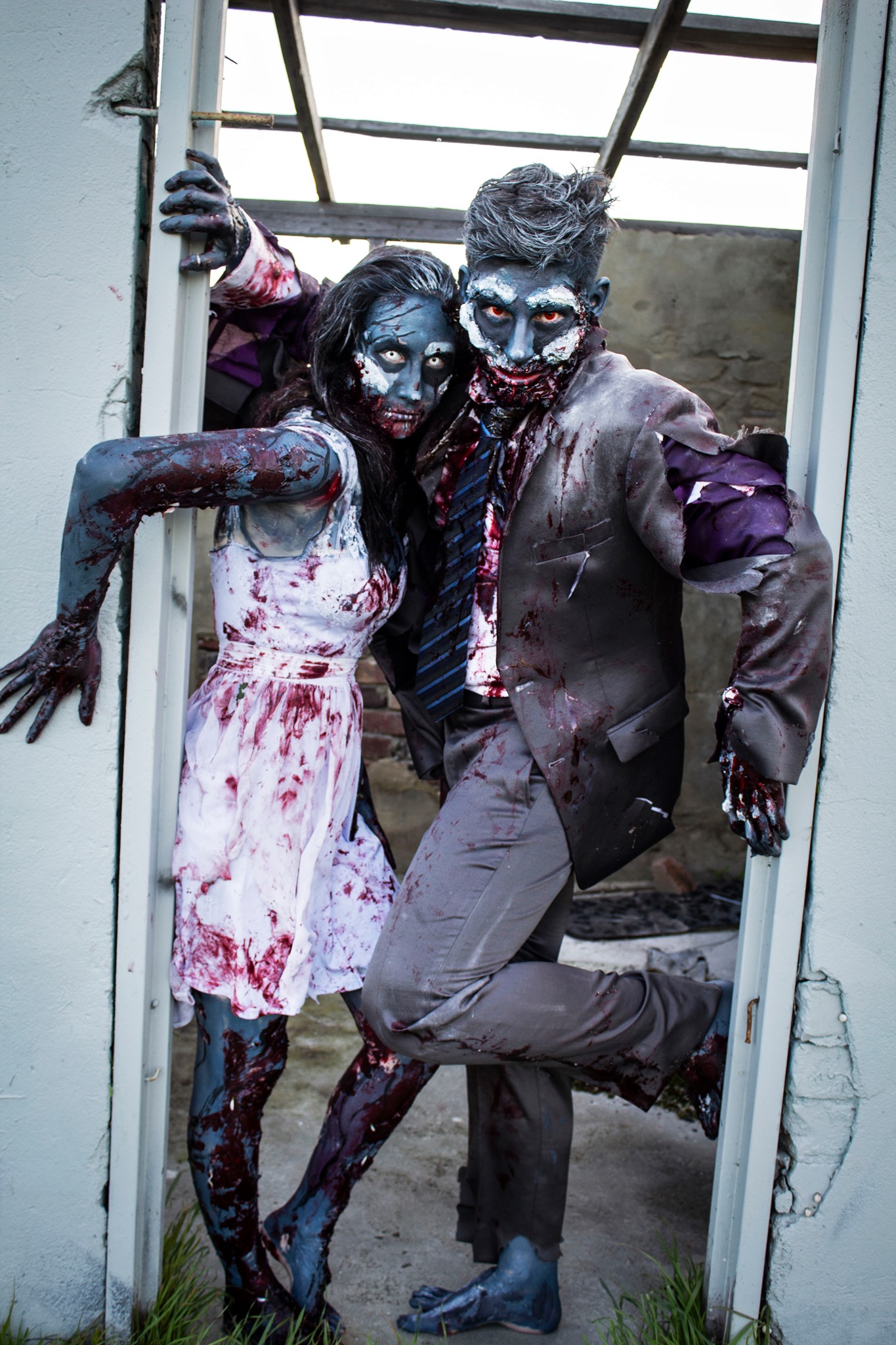 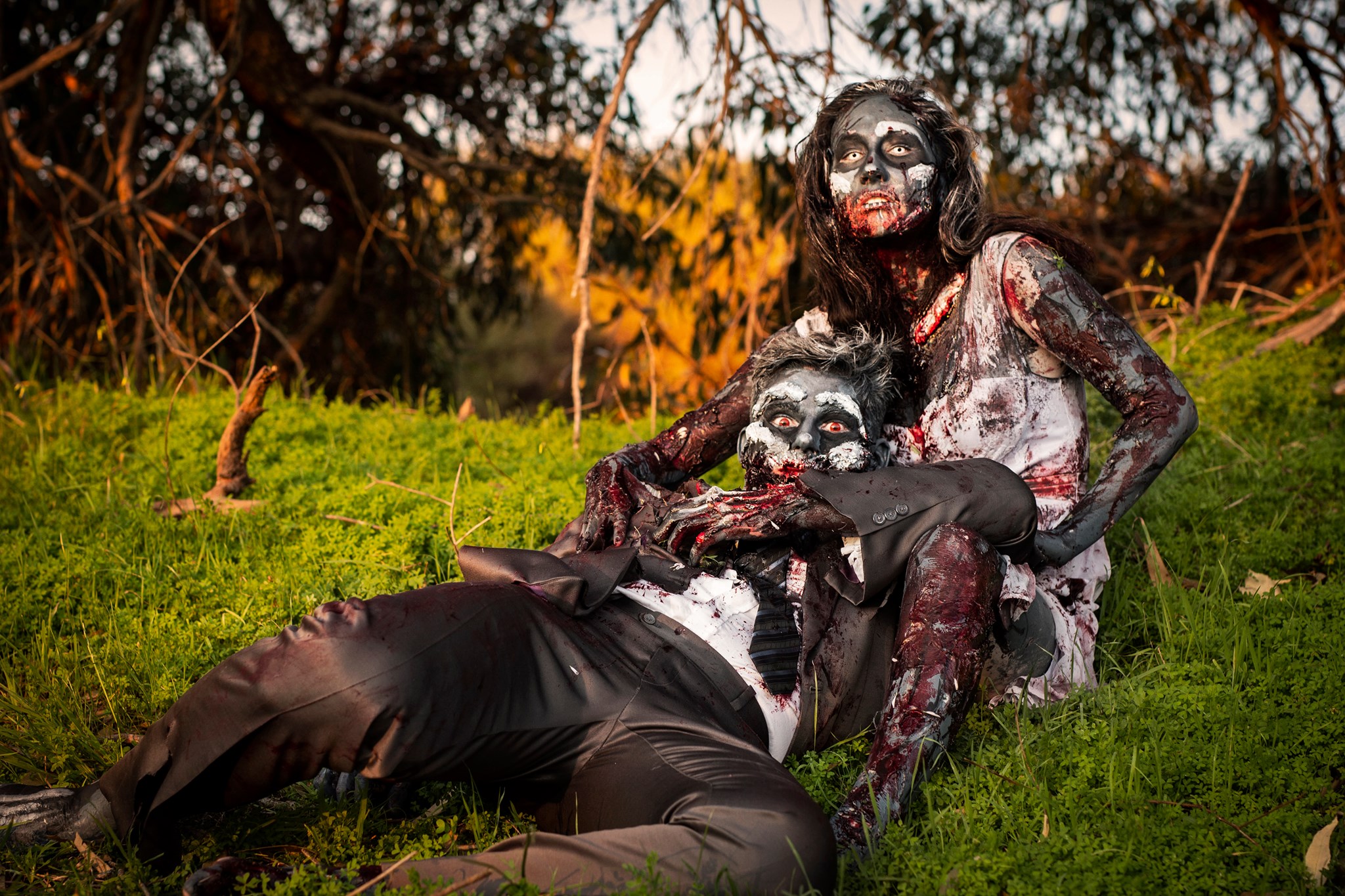 /u/xspikeshadowsx shared this post on the Satanism subreddit the other day. I can’t even imagine the pain or the dedication it would take to withstand scarification like this.

“First they traced the outline with a scalpel, then lifted and cut the skin on the inside of the design, and finally scraped some flesh out to make sure it was even over the whole symbol to promote a nice smooth healing process and clear end result.”

“I wanted the symbol to be as brutal as possible, not only from a design and aestethic point of view, but also the process, what’s more brutal then scar tissue and mutilation, right?

Commitment to the process wasn’t really much of an issue, once I set my mind on something not a lot is going to stop me, and I think that level of determination helped while the procedure was under way. There was no pain relief in any way shape or form, I wanted to earn this symbol, but even saying that, it was one of the most painful experiences of my life.”

Robert is a world famous, mysterious and mischievous entity that dwells inside this 115 year old doll in Key West, Florida. Over the years he has been blamed for many misfortunes: divorces, injuries and even an outbreak of the Yellow Fever. He is even allegedly the original inspiration for Chucky from Child’s Play. You have to ask his permission before taking a picture, or he will seriously mess your life up. Letters are received all the time apologizing to Robert for this faux pas, often lamenting the misfortunes that came as a result of their rudeness. 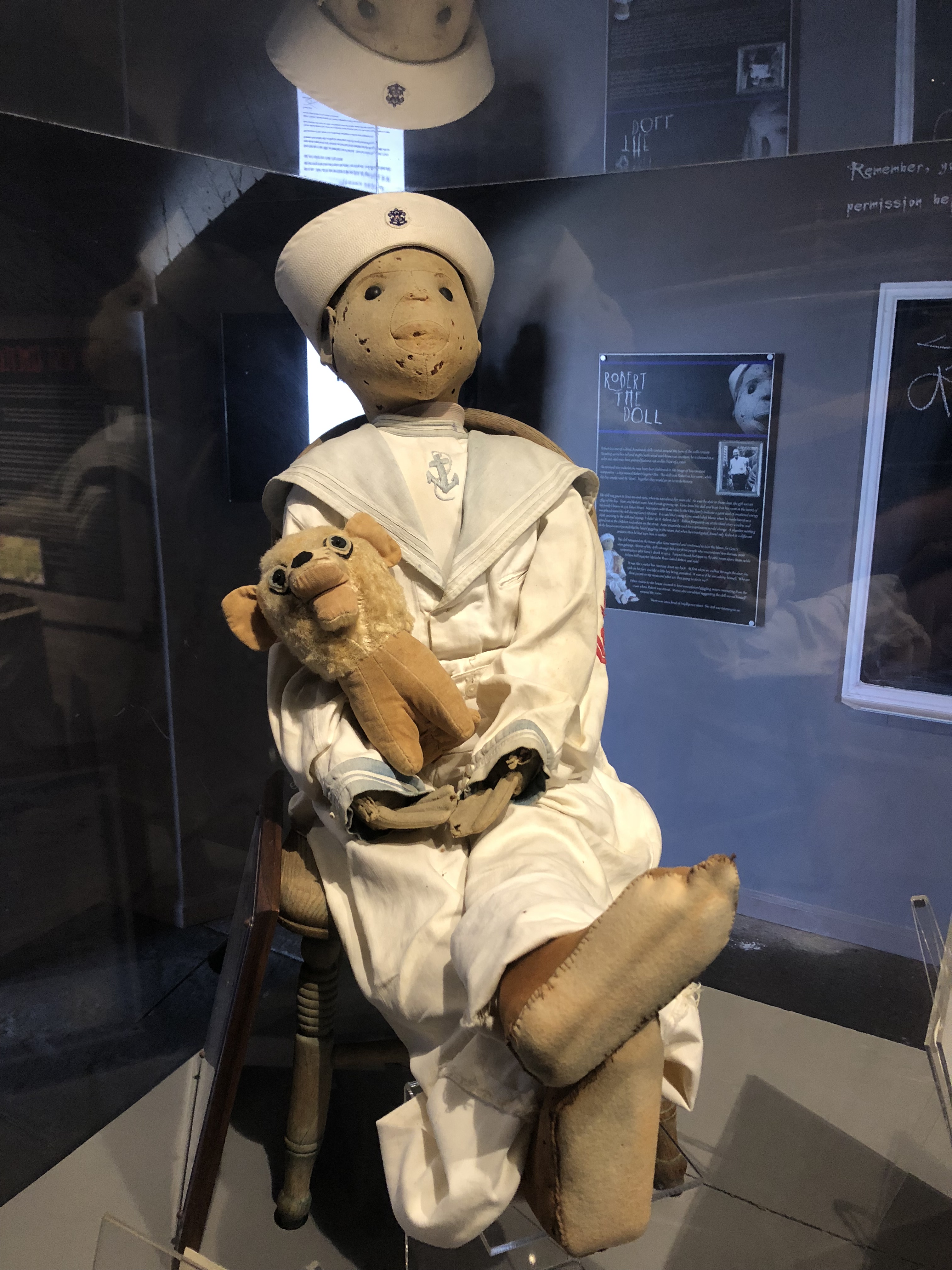 The history of Robert and his original owner Robert Eugene Otto is lengthy and very mysterious. Recently Amazon dedicated a special episode of Lore to Robert and his first family. According to modern legends, Robert sometimes moves from place to place. He can cause all kinds of mayhem. People who visit him today who make flippant remarks often regret it in the end. 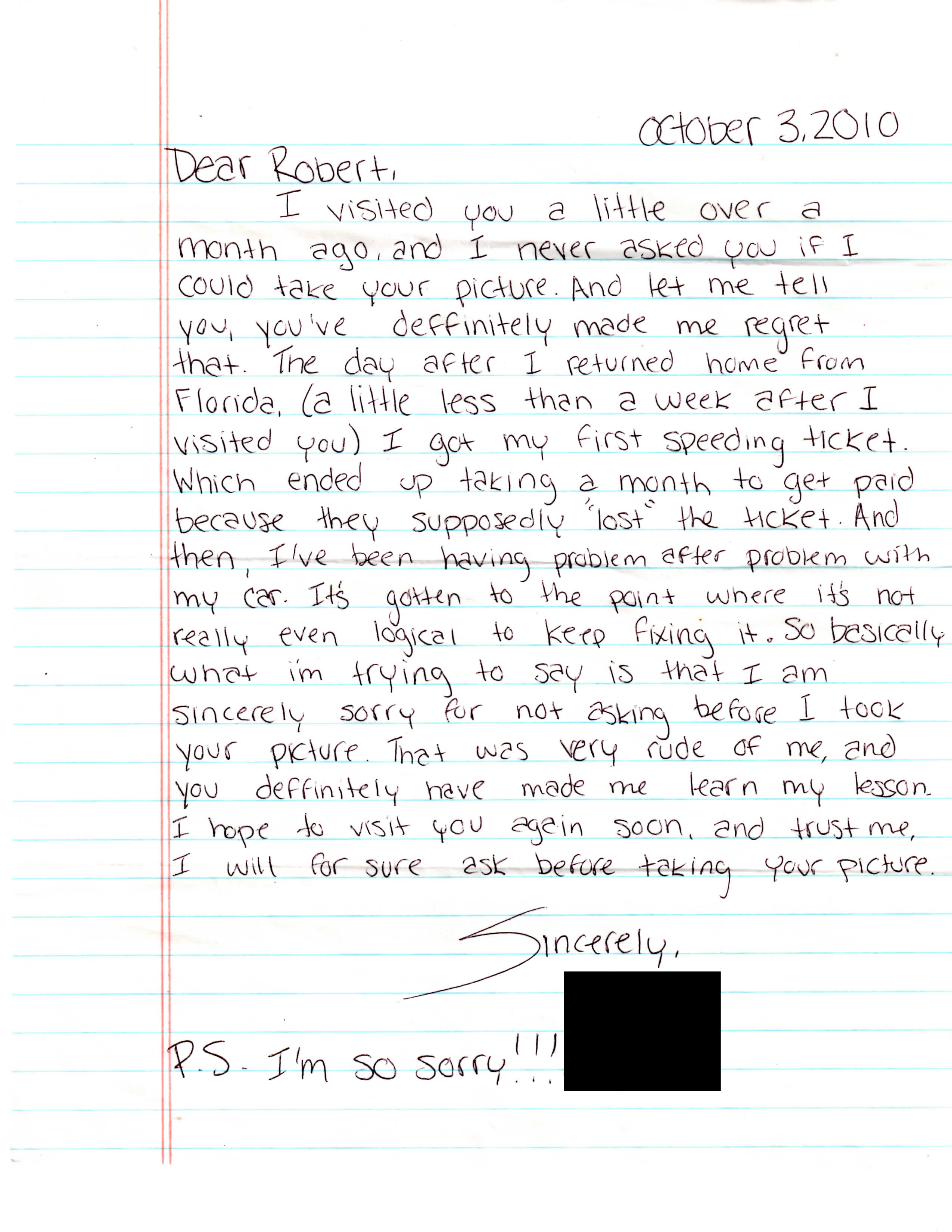 I have wanted to meet Robert ever since my first time in Key West when I was 13. When we finally did meet this year, I was just as excited then as I was 20 years ago. I was elated when we laid eyes on each other, and I told him all about the first time I learned about him and what a fan I was. He gave me really friendly vibes as I very politely asked his permission to make this post. For a while afterwards I was stuck in a sort of obsessive day dream about being friends with him. There is definitely spiritual power inside that doll! You can learn more about him at his own website.
Thanks again Robert! 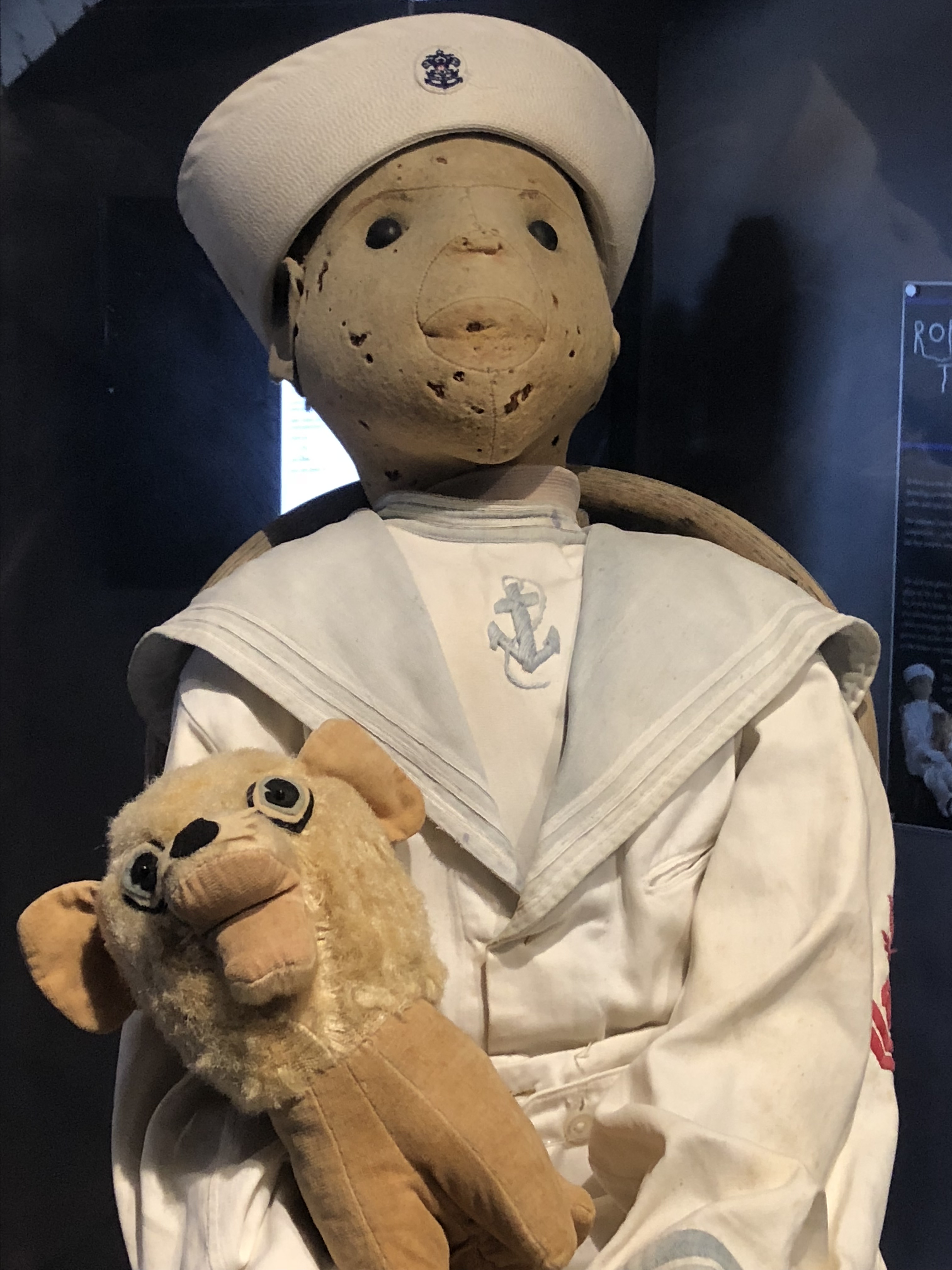 Scurvy Drunkard is an up-and-coming multimedia artist based in Australia. She first attracted my attention with the paintings she makes with her own blood. Everything she produces is deeply disturbing, and I absolutely love it! Her work touches on themes of fear, body horror, consumption, magic, Eros, and so much else. Who knows what twisted and depraved ideas will come pouring out of her mind at any moment?! See more on her Instagram.

Some of my favorite work of hers, featured below. 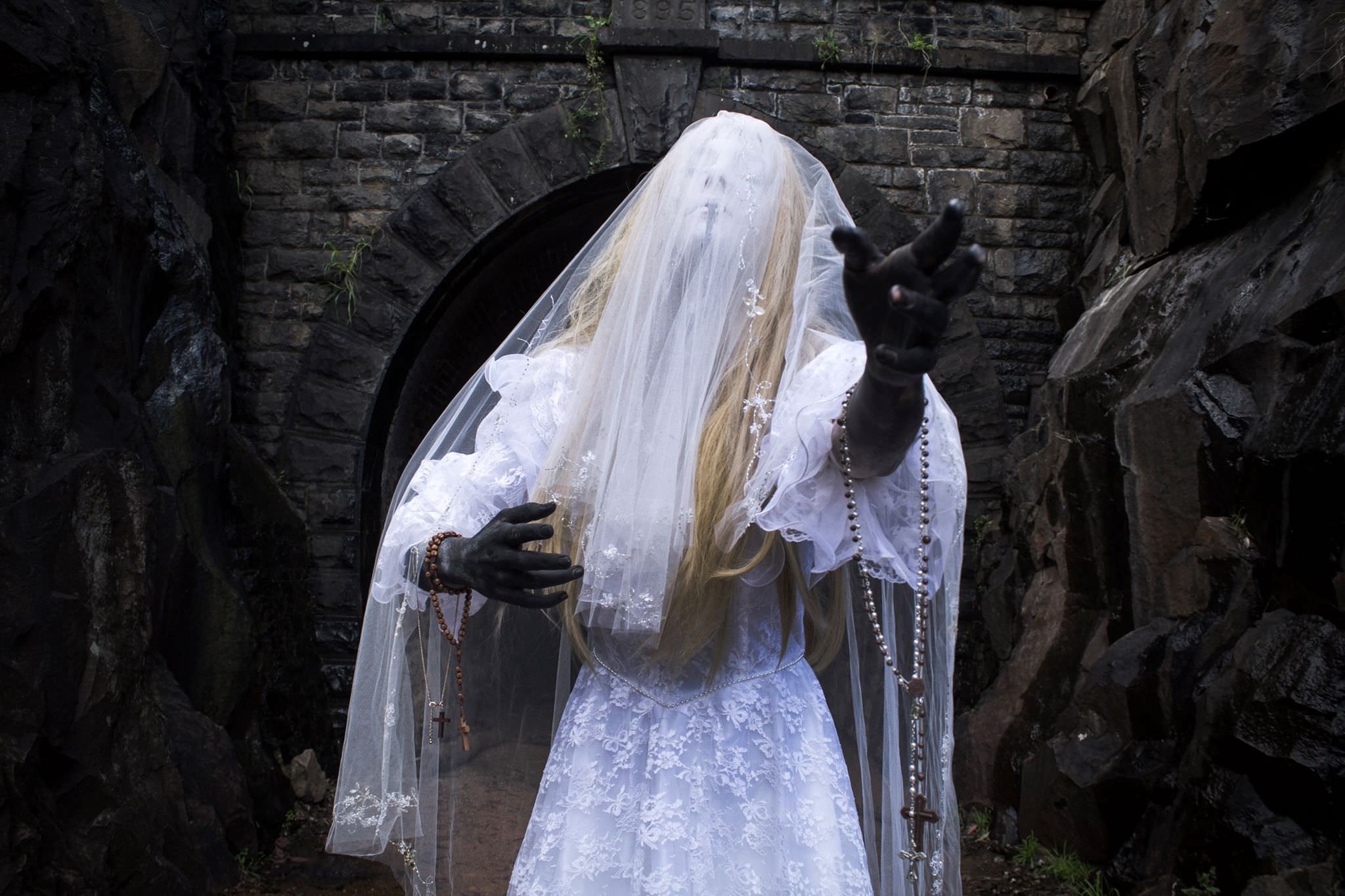 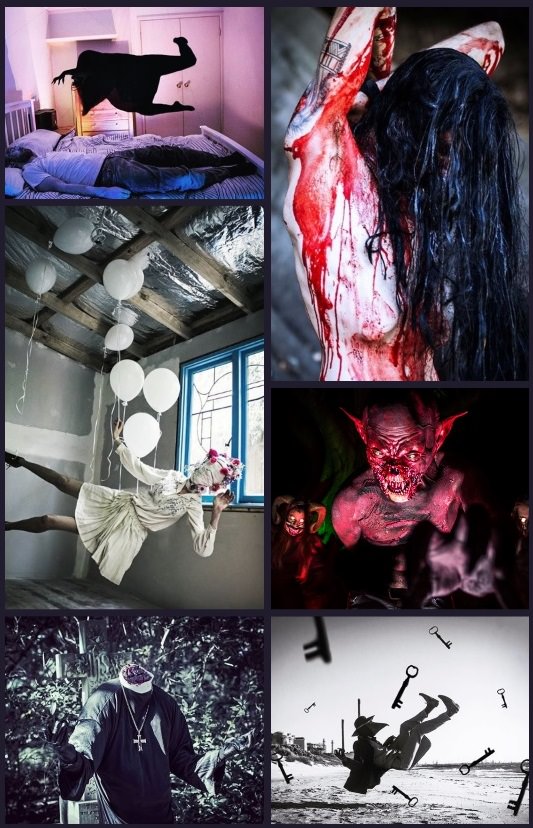 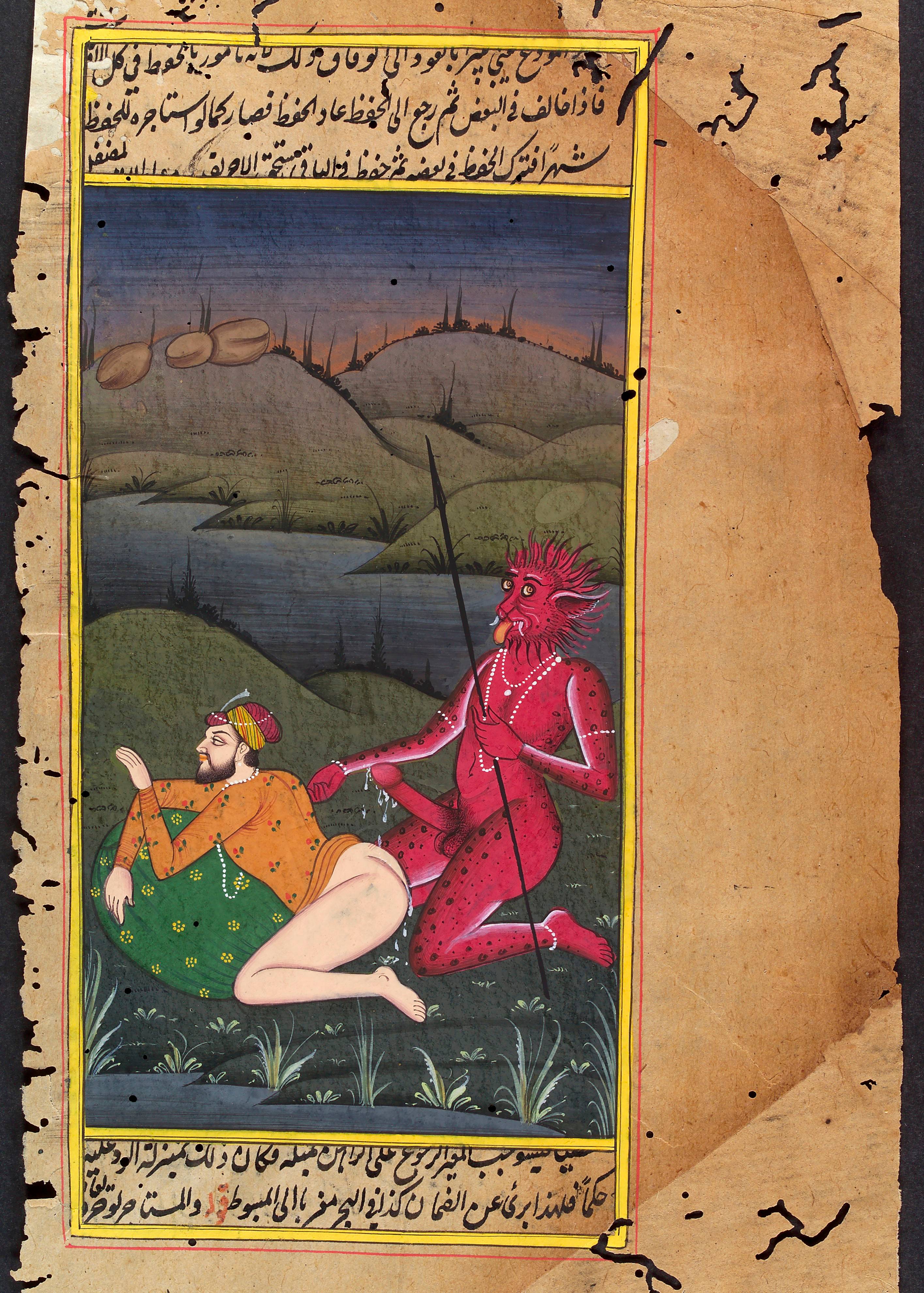 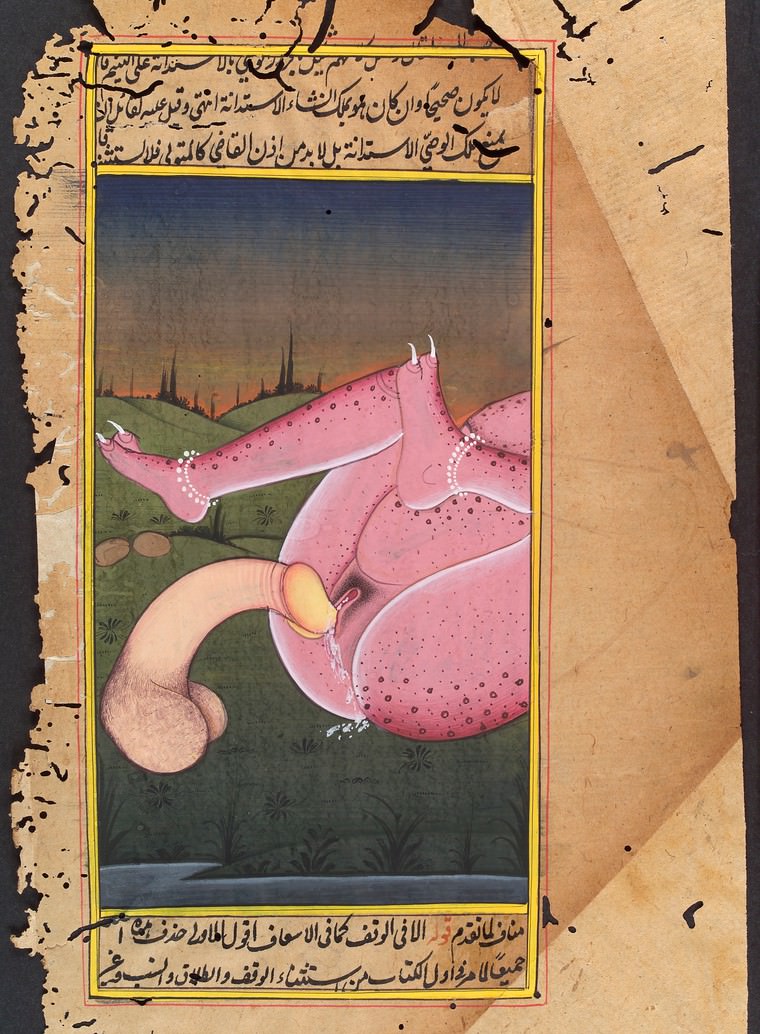 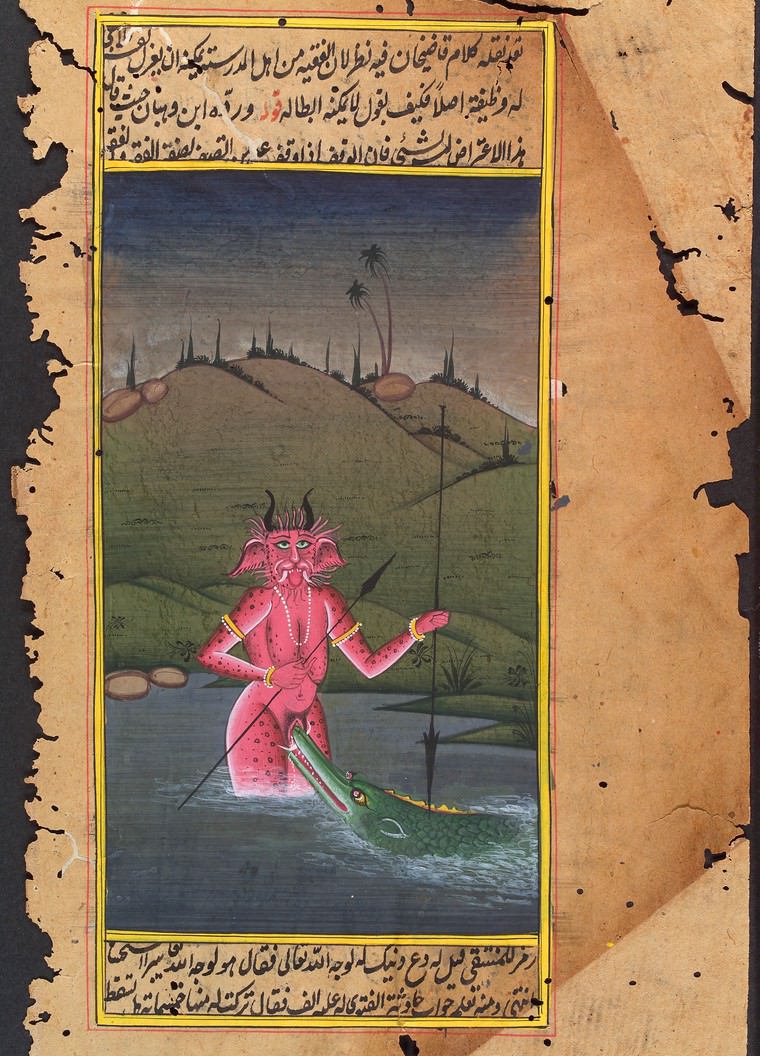 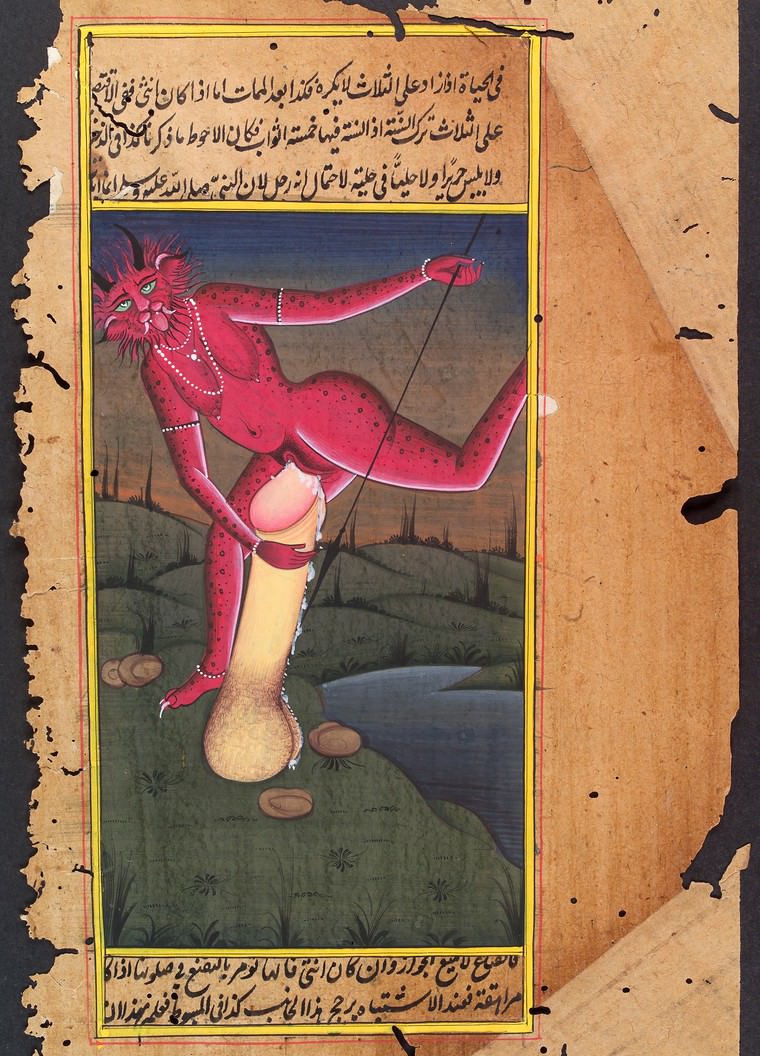 13th century alchemist Michael Scot in his work Liber luminis luminum, gives us a recipe for a “miraculous powder” which when used “can bring wisdom, joy and all manner of blessings from God above.” The only catch? You have to get a family of toads drunk and high, then burn them to a crisp!

Take ten poisonous toads, and let them be live, and put them in in a special vessel that they can’t escape from. Later take fresh asphodel [or daffodil] and white hellebore in good measure, extract as much of their juice as you can, put the juice in the vessel with the toads and let them drink it for nine days.

Then stick the toads into a clay pot, and place it into an oven so that the animals are burnt to ashes with sufficient heat. And thence remove them and carefully grind them up. And when that work is done, take Salt of Wisdom (alembroth), alkali, and just as much ammoniac. And then carefully grind ,mixing it with the (sap?) [lit. “urine”] of a yew tree. And dry it and grind it again. Do that nine times and you’ll make a miraculous powder.

Whether God will bless you if you try this, I can’t say. But I’m sure mixing 5-HO DMT with other alkaloids, along with ammonia and other things from under the kitchen sink that you’re not supposed to mix together, is going to definitely make you feel special, perhaps permanently. DO NOT TRY.

Brown, Rev. James Wood. (1897). An enquiry into the life and legend of Michael Scot. Retrieved from https://archive.org/details/enquiryintolifel00browrich

With the current events surrounding the 300 priests in Pennsylvania who sexually abused more than 1,000 children, talk of priestly celibacy has the internet all abuzz again, as well as people like the Catholic League, The Church Militant, and more than one archbishop trying to shove the blame back onto this “gay cabal” that has taken over the church. Gee it’s almost as if no change has been made between today and 2002, when clerical sexual abuse cover-ups first became widely known.
Fear not, you faggoty confrères, for I have found for you some fascinating, fitting and fortuitous magical formulae to help fulfill the fondness you feel for fornication with the fledgling young fellows in your flock!
Yes, while flagellation, castration and public denial are some of the oldest tricks in your book, I went digging and found older tricks from older books. Let’s look at some!
Petrus Hispanus, who may have also been known as Pope John XXI, wrote in his Thesaurus pauperum about an ointment made of hemlock and mandrake that could be slathered on your testicles to take away sexual desire (Here translated into English by Humfrey Lloyd in the 1500’s):

FYI this book also includes instructions and remedies on contraception and menstruation as well—a lot to ask from a pope!

This may be a case of fighting fire with fire, as the 12th century abbess and polymath Hildegard of Bingen writes that the mandrake is a lusty plant which… “because of its similarity with Man’s image, lies in wait with the Devil’s temptations more than other plants. Whence, according to his pleasures, whether it be good or bad, Man is aroused, just as once he romped with pagan gods.”
Elsewhere in her book Liber subtilitatum diversarum natuarum creaturarum (I-56), she gives us a counter spell for those men who, because of magical influence, couldn’t keep their cocks in their pants. They should wash a FEMALE (or male if he liked boys) mandrake root and tie it to their abdomen for three days and three nights, then remove the root, split it in two, and tie it then to his thighs for three more days. He would then pulverize the right arm of the root and swallow the powder.
A small sample of early Christian Shamanism can be found in the story of the mandrake, which was also used by lay folk for insomnia as well as invigoration, but which could easily be taken too much resulting in death. The sexual powers of mandrake were not unknown during the Middle Ages, as even Agrippa noted its use among pagan and early Christian potioneers as a potent aphrodisiac, and an offering by Grecian whores to the goddess Venus (De incertitudine et vanitate scientiarum liber, 203)

Lloyde, Humphrey. (XVI century) [Manuscript]. The treasury of healthe conteynyng many profitable medycines gathered out of Hypocrates, Galen and Auycen, by one Petrus Hyspanus [and] translated into Englysh by Hymfre Lloyde who hath added thereunto the causes and sygnes of every disease, wyth the Aphorismes of Hypocrates and Iacobus de Partybus redacted to a certayne order according to the membres of mans body, and a compendiouse table conteynyng the purginge and confortatyue medycynes, wyth the exposicyo[n] of certayne names [and] weyghtes in this boke contayned wyth an epystle of Diocles vnto kyng Antigonus. Retrieved from Early English Books Online

Total filth. I will always remember the time I met Sharon back when I was a twinky little 26 year old gayboy. She let me come over even though her manager was trying to reel her backstage. What a nice ghoul!