I don’t live in a place where clear skies happen often–such a shame because one of my favorite hobbies is astrophotography. This year though, I made an arrangement (with a church, of all groups!) to make use of a private field near my house for astronomy purposes. Astronomy is, after all, hugely important to magic!
On the night after Christmas, the sky finally cooperated and so I went out to this field for the first time to take pictures with some new equipment. As expected, the cops showed up in the middle of my work with their obnoxious bright lights, ruining whatever shot my camera was working on. Know-nothing neighbors had reported suspicious activity where a strange man was allegedly taking pictures of their houses in the middle of the night. So I showed the cops my equipment, and my proof of permission to be there.
That still didn’t stop the interruptions since other nosy neighbors simply plowed through the pristine field in their 4-wheeler to stop right in front of my camera to see what I was doing. “I’m taking pictures of space. You just drove right through my shot man”. They were nice enough to apologize and we talked a bit about space before I shoo-ed them off. It was a night of hassle and obstruction, but I at least managed to get two decent pictures using a barn-door tracker which I had built the week prior.
This imaging session represents a big milestone for me, as it was the first time I have ever successfully imaged another galaxy. It just boggles my mind that the precious light from those stars had been traveling across the vast ocean of space for 2.5 MILLION years before it made its final destination in the sensor of my camera. In my city, the night pollution is a nightmare. I don’t get to practice much but I am always studying to improve my techniques. This is proof to me that study and sound theory make good results!

I’ve been using this Fall and Winter to spend more time under the night sky, not only making astronomical observations, but in spiritual contemplation. My coven recently had our annual High Sabbat of the Woods where there was much time to lay under the stars in a visionary state. We spent most of our trip watching the sky from dusk till dawn. As the trip started kicking in, the sun was setting in a gorgeous gradient of orange red and yellow against the black horizon of trees, as Venus and Jupiter glided downwards to follow the sun. I could see how the planets are revolving around the sun in a 3D universe, not just the dome of the sky. It was a moment of cosmic revelation which just made me feel so incredible small against the unfathomably huge and ancient universe.
For a time, our group had been scattered about in the woods exploring. When we all suddenly met each other in a cypress swamp, we looked through the dense trees at what seemed like an industrial light nearby. It was the moon, shining so brightly and hanging low and large above the horizon. The rest of our trip was lit entirely by moonlight. It was a beautiful night of enchantment and delight.

This weekend in the northern hemisphere we were all treated to an auspicious occurrence of a full moon in Pisces. This placement to me indicates a great magnification of spiritual movement, intellectual flow and inward creativity. Retrograde Neptune which governs this lunation may cause it to seem like the spiritual seeker is trying to swim upstream–there is struggle but determination in his efforts.
The day of the 13th, Sage, the priestess of our coven, invited me to join her in a full moon ritual. Despite being tired from all the crazy shit going on in my professional life right now, I decided that a full moon on Friday the 13th just cannot be overlooked. So we gathered!
Here in the south it is still hot at night but a passing tropical storm across the state thankfully provided some breeze and ambiance to the surroundings. This night was full of life as all the trees swayed, the crickets sang and a large and invisible family of frogs were calling out to each other as the moon passed silently overhead. To prepare we set up a working table outside. We took a lot of time before starting anything to ground ourselves and discern what need there was for working under this moon. It would be a night for divination and spirit travel! Not having a proper crossroads to work in, we decided instead to get cross-faded with an inebriating combination of alcohol, cannabis, kinnikkinnik, and the last dregs of my vision potion (the jury is finally out on this BTW. It is very inspiring).
We purified ourselves to start, cast the circle with the LBRP and called the elements together. We opened our ritual by drawing down the power of the moon into our space. Then we took out the Black Mirror. This mirror was built by me, consecrated to the moon, and since then has never touched the light of day. Sage took her dive into the depths of the mirror as I stood watch. By now all the potions and fumes from earlier were keeping me relaxed but deeply focused. I couldn’t tell you what Sage saw in the Mirror. That is for her to tell. But when I went in next, I had a profound, almost psychedelic experience.
My intention when starting this divination was to discern whether there was any hope in the future for the human species. As I opened the veil and entered into the Mirror’s fathomless depths, my mind’s eye briefly caught a glimpse of the anthropological story of homo sapiens from the last major Ice Age, to perhaps a not-too-distant future of human space exploration. But before gleaning too much about my intended question, a cosmic voice interjected…
“You’re asking the most boring question ever”, it said. And suddenly my vision transformed into an ever-expanding, multi-dimensional, fractalizing space. It was a universe beyond our own. It was the world of forms and it was the world of the formless at the same time. This multiverse of possibilities, endless endless combinations, opened up to me like a book in an alien script. “Is this the Askashic record?!!”, I thought to myself. No answer. Only the fast whizzing of ineffable words, images and feelings which were beyond my understanding. It was too much to contain. My mind was spinning and then somehow I spiraled back into my normal time and place, outside the Mirror, and outside still under the light of the moon. The lesson from my seemingly idiotic question? The human condition is an illusion of permanence. My human consciousness is a mere drop of water temporarily separated from an immense ocean of Mind. In some ways this is disturbing. In other ways it is comforting.
After this we had to stand up, move around, stretch and breathe. We then sat down for a mutual astral voyage up to the sphere of the moon, to explore its powers, denizens and structures. But that is a highly detailed story for another time. Finally we set up a small telescope which we used to focus moonlight into a singular point. We took turns charging our ritual objects with this favorable lunar energy, and blessing ourselves with its light. We also prepared a lovely urn of moon water, which we will use in the coming days.

Are you currently working with planetary powers, but you’re tired of mulling over all the arithmetic and calculations, the correspondences, and the timing of it all? Here is my gift to you (and myself)–The Planetary Hours and Days Calculator. Simply enter the day, sunrise and sunset of the time and place your working will occur, and presto-changeo, all the correspondence work is done for you. You can download this worksheet for free, at the link at the bottom. 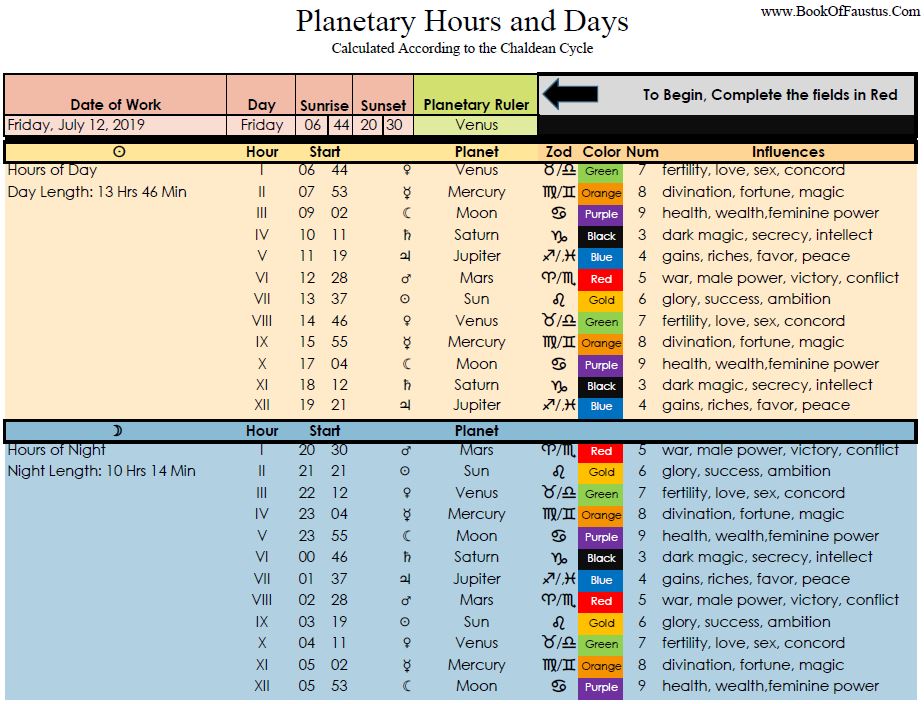 To use this calculator, simply determine the time for sunrise and sunset at your location, then fill in the red fields at the top. Hours are numbered using a 24-hour clock. Using this tool, you can plan ahead to determine the appropriate time for your planetary working in advance. Click the HERE to download this worksheet.

In certain galleries of the British Museum, visitors are allowed to hold ancient artifacts with their own hands. This piece in my hand is an inscription in cuneiform from the 21st Century BCE Ziggurat of Ur. The Ziggurat, which still partially stands, was a temple complex dedicated to the Moon god Nanna (Sin). He was described as the father of all gods, and the “Lord of Wisdom”. The main sanctuary at Ur was called E-gish-shir-gal, “house of the great light”. 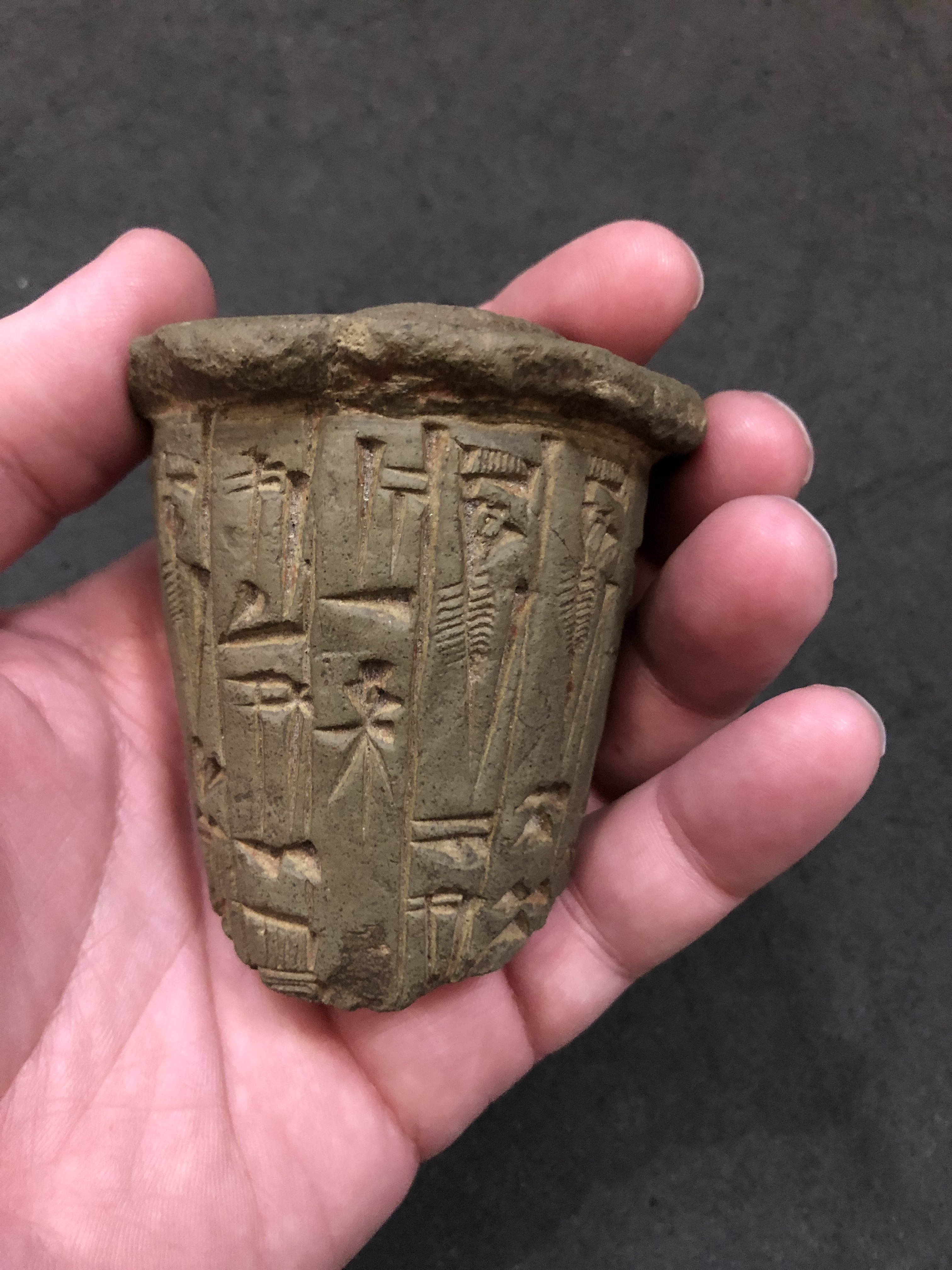 In some legends, Nanna begat the goddess Inanna (also known as Ishtar), who governed love and beauty and was associated with the planet Venus. She was called the “Queen of the Heaven”, and her religious influence has stretched into the present day: later known by the Phoenicians as Astarte, then to the Greeks as Aphrodite, all of whom share many similarities to the Virgin Mary of Christian worship (also a Queen of Heaven).
We are all heirs to great Mystery. None of our modern religions have ever stood on their own. They are built on the shoulders of giants, ever more ancient and nebulous because of the vast gulfs of time that stand between us and them. As I held this precious and unique artifact in my hands, I had a true sense of awe as I contemplated these ideas in my heart. To many of my friends, history is boring. I have always found that history is alive and we are surrounded and formed by it in every single way. Perhaps in another 4,000 years, this tablet will still be preserved next to artifacts from our own times, where other people will delicately hold them and wonder at what was…