I have a lot of personal projects going at all times. These are usually very complex, technical hobbies. My projects can last months or even years, depending on the state of my focus or creativity.

Without revealing too too much, I am just writing here to celebrate, to commemorate, a great personal triumph in the field of chemistry. I have performed a procedure that has resulted in a great Mystery. A precious, beautiful substance of great price. This week, I feel like the alchemist who has finally transmuted his base substance into gold. I have extracted, dissolved and purified and bottled a Wonder.

I’ve been studying chemistry for a number of years now and (second to astronomy) it is the most mind-expanding practice I have discovered. It makes me feel like a god, but it’s more like an intelligent ape playing with the building blocks of the Universe.

From start to finish, it is a practice of mindfulness and forethought. Every step taken is deliberate and intentional. It is as much an art as a science. Watching reactants interact with each other, transferring energy, moving towards equilibrium, changing state, color and temperature, all at my own direction.

So, after years of toil both in the classroom and the lab, it is such a high feeling of reward to see something of my own crystalize before my eyes.

Astrophotos by Yours Truly.

My yard was partly obstructed by trees and powerlines, so had to take these from the roof. Struggled a bit during totality with exposures and star trailing because I couldn’t get my motorized mount up to the roof. I used my smaller telescope instead, which both limited exposure times and reduced the contrast. Still I’ve always wanted to make an eclipse composite so here it is. Every time I work on astrophotography I learn something new, usually from mistakes. The lesson this time around was plan ahead, and work sober.

Astrophotography is one of my favorite pastimes when I am able to do it. Where I live, the weather is very fickle, and the sky is not always accommodating. But when I am out in the field I have the opportunity to spend quality time in solitude, contemplation, and deep focus. Usually my failures, often brought on by careless mistakes, outnumber my successes.
I’m currently experimenting in new astrophotography techniques. This is a hobby that can take away all your money and time when you let it. I have put thousands of dollars into hardware and software trying to push my skills to the limit. Over time, my skills have grown and my knowledge of sky photography has deepened. Despite my recent improvements, I still take on a beginner’s mindset when learning new techniques.
Below is the result of my most recent imaging session, right from my front yard, followed by a display of how my skills have continued over the years.

I admit that I’ve been scoffing at the Christians who have been pleading on the blood of Jesus to stop the pandemic. But so many of those crazy shitheads have been foolishly using their faith as the only means of protection, with no clear intentions of actively containing the spread.
Meanwhile, my country’s government has been pretending this was all a hoax until just the other day, and we are starting to prepare for a worst case scenario where our under developed healthcare system will fail us, and we will be left to our own devices. My state’s government has shut down bars, nightclubs, movie theaters, and many other gathering places. Meanwhile food and sanitation products are becoming difficult to obtain.
As much as I personally would love to see the collapse of society while a plague rushes over the land, I am going to do my part. While using scientifically proven best-practices, you all know what that entails by now, AND spiritual exercises of compassion, we can get through this weird fuckin’ period of history.

My coven will be conducting a spell for the containment of SARS-CoV-2 on Saturday, March 21st 2020 at 22:00, EST. If you want to join in virtually, see the livestream on my instagram, @heissowitty .

You can rewatch the livestream at any time here:

I don’t live in a place where clear skies happen often–such a shame because one of my favorite hobbies is astrophotography. This year though, I made an arrangement (with a church, of all groups!) to make use of a private field near my house for astronomy purposes. Astronomy is, after all, hugely important to magic!
On the night after Christmas, the sky finally cooperated and so I went out to this field for the first time to take pictures with some new equipment. As expected, the cops showed up in the middle of my work with their obnoxious bright lights, ruining whatever shot my camera was working on. Know-nothing neighbors had reported suspicious activity where a strange man was allegedly taking pictures of their houses in the middle of the night. So I showed the cops my equipment, and my proof of permission to be there.
That still didn’t stop the interruptions since other nosy neighbors simply plowed through the pristine field in their 4-wheeler to stop right in front of my camera to see what I was doing. “I’m taking pictures of space. You just drove right through my shot man”. They were nice enough to apologize and we talked a bit about space before I shoo-ed them off. It was a night of hassle and obstruction, but I at least managed to get two decent pictures using a barn-door tracker which I had built the week prior.
This imaging session represents a big milestone for me, as it was the first time I have ever successfully imaged another galaxy. It just boggles my mind that the precious light from those stars had been traveling across the vast ocean of space for 2.5 MILLION years before it made its final destination in the sensor of my camera. In my city, the night pollution is a nightmare. I don’t get to practice much but I am always studying to improve my techniques. This is proof to me that study and sound theory make good results!

I’ve been using this Fall and Winter to spend more time under the night sky, not only making astronomical observations, but in spiritual contemplation. My coven recently had our annual High Sabbat of the Woods where there was much time to lay under the stars in a visionary state. We spent most of our trip watching the sky from dusk till dawn. As the trip started kicking in, the sun was setting in a gorgeous gradient of orange red and yellow against the black horizon of trees, as Venus and Jupiter glided downwards to follow the sun. I could see how the planets are revolving around the sun in a 3D universe, not just the dome of the sky. It was a moment of cosmic revelation which just made me feel so incredible small against the unfathomably huge and ancient universe.
For a time, our group had been scattered about in the woods exploring. When we all suddenly met each other in a cypress swamp, we looked through the dense trees at what seemed like an industrial light nearby. It was the moon, shining so brightly and hanging low and large above the horizon. The rest of our trip was lit entirely by moonlight. It was a beautiful night of enchantment and delight.

The Augsburger Wunderzeichenbuch (1552 ?) was a compendium of famous meteorological and astronomical phenomena  as well as selected illustrations from the Bible. The more interesting part here is that the writer associates the various comet appearances with specific disasters (disaster literally meaning an ill-starred event) in world history. In this work, the author does not make the distinction between comets and meteors which we do today. The segment on miraculous signs appears between the Old and New Testament portions and depicts several freak weather incidents and celestial apparitions from antiquity up to the year 1552.

This is a really interesting archaeological find, and right after I posted my own magical treasure trove. Recently in Pompeii, where excavations have been occurring in one form or another for the past three centuries, there was discovered a casket full of daily-use implements which also included a number of magical artifacts. 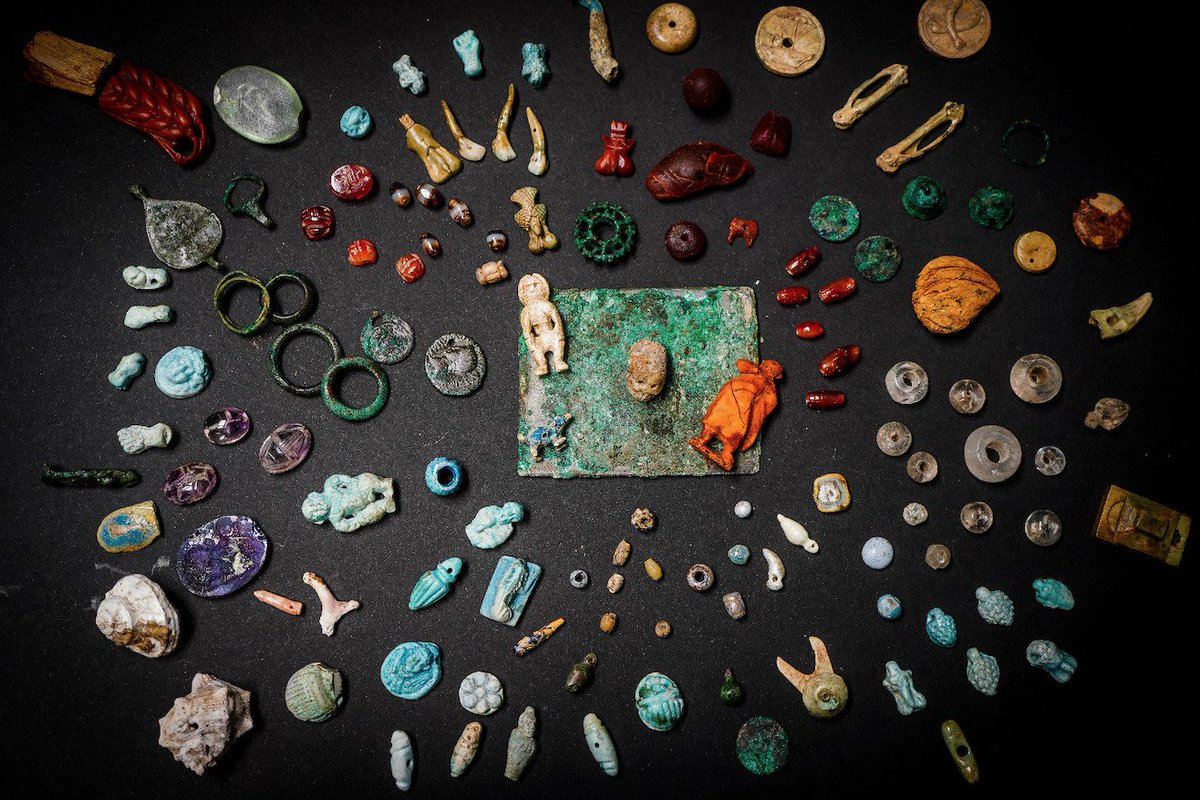 Amulets, gems and small objects re-emerge from the excavation of the Regio V. They were related to the female world, used for personal ornamentation or to protect from bad luck. They were found in one of the rooms of the House of the Garden.
Placed in a wooden box, it has been restored and has been brought to its former glory by the restorers of the Laboratory of the Archaeological Park of Pompeii. They were probably objects that the inhabitants of the house could not take away before they escaped.

The wood of the box has decomposed and only the bronze hinges remain, well preserved under the volcanic material.
Among the numerous objects found, two mirrors, pieces of necklace, decorative elements made of faïence, bronze, bone and amber, a glass unguentary, phallic amulets, a human figure and various gems (including an amethyst with a female figure and a carnelian with a craftsman figure). In a glass paste is engraved the head of Dionysus, on another a dancing satyr.
The high quality of the amber and glass pastes and the engraving of the figures confirm the importance of the domus owner.
Soon the jewels will be exhibited, with other Pompeian jewels, at the Palestra Grande, in an exhibition that will be a follow-up of “Vanity”, the exhibition dedicated to jewels from the Cyclades and Pompeii, as well as from other sites in Campania.​
The full article is at Pompeii Sites

This is a very illuminating “snapshot” of the life of one ancient Roman household on the day of October 24, 79 CE.  Perhaps the casket was filled in the chaos of the disaster while the owner attempted in vain to take some of her belongings with her to escape, only to suffer the fate of Vesuvius. Just imagine what archaeological evidence you and I will leave behind for some future archaeologist to discover, 2000 years into the future.

They moved my ephemeris content to a new channel without the sexy narrator! Also this video does not mention the momentous occasion of a total Lunar eclipse coming to North America on January 21st, 2019. Prepare your works!